Westdeutsche Zeitung: They  complete each other in an ideal way.

The Jerusalem Post:  a good and varied program in which the musicians displayed their  professional skill, firm grasp of structural design, imagination and temperament.[...] The well known waltzes were performed with winsome charm and tenderness. So were the the lively Slavonic dances, which provided a musically delightful ending.

Yediot Ahronot: By their personal approach to playing and superior technique, they have been increasingly acclaimed in our concert halls.

Haaretz: No wonder that the performers of the most complex pieces on the program were pianists Sara Fuxon and Bart Berman - Duo Beer Sheva - who are entitled to every praise.

The Jerusalem Post: Their cooperation is extraordinary, yet they maintain distinct personalities, with Sara Fuxon passionate and Bart Berman restrained.

Haaretz: Real festive joy reigned at this outstanding evening that included a festival of first performers by contemporary composers, in an excellent, reliable, sensitive and brilliant interpretation by Duo Beer Sheva

The Jerusalem Post: Special praise must be made of pianists Sara Fuxon and Bart Berman for their immensely refined treatment of George Crumbs Celestial Mechanics. 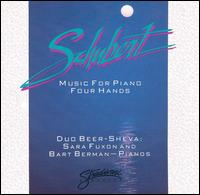 Sara Fuxon (1932-1992), born in Israel, was one of the country's most versatile concert pianists, with an exceptionally large repertoire including countless contemporary works. She studied with Leo Kerstenberg and Karol Klein in Israel, with Jacqueline Blancard in Switzerland and Peter Feuchtwanger in London.

Widely acclaimed as an innovator in the performance of Israeli music, Sara Fuxon premiered many works and regularly played at the annual Israeli Music Symposium. Appearing in Israel with all of the country's orchestras, in recitals and with chamber music groups, she gave concerts abroad as well, in Holland, Belgium and France, and recorded for several European radio stations. 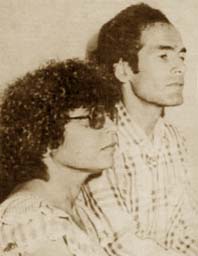 In 1979, Sara Fuxon and Bart Berman, who had just immigrated to Israel, founded DuoBeerSheva. Together, they made three European concert tours, giving recitals in Germany,  Belgium and the Netherlands, at concert halls, at the Rhine Music Days and recording programs for the German and Dutch radio. In Israel they gave numerous concerts, in the major concert halls of Jerusalem, Tel Aviv and Haifa, as well as in development towns, kibbutzim and moshavim, with highlights at the Israel Festival, the George Crumb Retrospective and the Kfar Blum Festival. The duo recorded frequently for Israel's Voice of Music.

Duo Beer Sheva made a widely broadcast and acclaimed CD with Schubert duets (Stradivari, US), participated in a Frank Martin CD (Gallo, Switzerland) and in Israeli albums of kibbutz composers (on records and CDs). Because of their firm reputation as the most important Israeli piano duo in the contemporary field, they were selected to demonstrate at Ligeti, Pousseur and Shapey workshops. The Ligeti workshop was also recorded for the Educational TV and is still frequently broadcast. The duo also gave a musical weekend marking the Mozart year and performed at a Bart Berman Master Class in Safed.

The pioneering of Duo Beer Sheva and their pianistic qualities in performance of Israeli music were rewarded with a Mention of Honor from the Israeli Ministry of Education. In addition, Ha'ir weekly recently found their rendition of a Schubert duet, in an anonymous comparison, to be the fifth best ever.

to Bart Berman's site, since August 17th, 1996.
Please share your information and experiences for continuous improvement!